I wouldn't say I've been depressed, but I've been tempted at times to ring the 0800 helpline number for  SBCFP (Sturt Bereavement Councilling for Floundering Potters). Enough said.

Rehabilitation. Tricky. I thought I'd come back and hit the ground running. It's taken me longer to adjust to working back in my own workshop than it did at Sturt! It's like trying to fit into the past - a lot has happened since then. I think back to my opening post to this blog, There's No Other Place Like Home? The answer to that question for me is Yes, there is. After 3 months at Sturt and in Australia, I did feel very much at home and had settled into a comfortable rhythm. At the end, it was like being unplugged in the middle of my prime.

So, how do I move on? My first inclination was to smash all my pots and start with a clean slate. If it hadn't have been for Earth & Fire on the horizon, I think I might have done that. I really did want to. Instead, about a third were unceremoniously dropped on the floor...some rather hastily I realise in hindsight...

I painted a wall bright yellow to represent the sun, as I reckoned this was the only semblance to sunshine I was likely to see this summer. Fortunately, the last few days have been fanatastic. 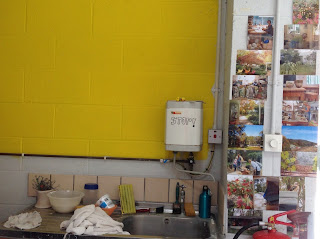 I also had dozens of photos printed and pinned them all over the workshop walls to help me feel at home, and as tangible evidence that the last 3 months hadn't been a figment of my imagination. 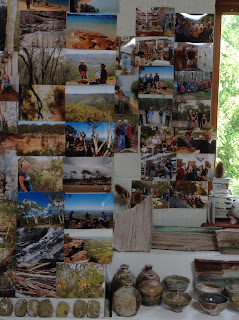 The final of the ornithological version of the singing competition, The Voice, was very tight. Open to the public vote (i.e. me), the Bush Birds beat the Swallows & Starlings hands down.

I set up a shrine to my Sturt pots, all of which have found very good homes in Australia. I kept two for myself which invite frequent handling and admiration. 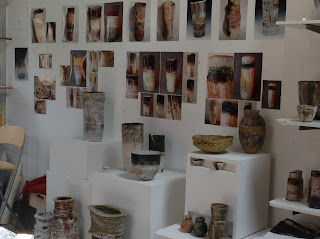 Here are a couple of new barks I've made since I've been back. 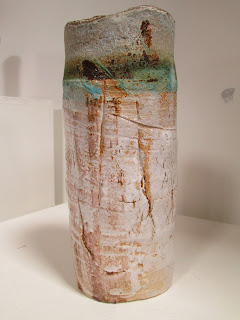 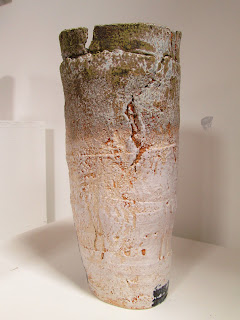 The annual Earth & Fire ceramic market held at Rufford Craft Centre, Nottinghamshire, went well. I was lucky to be in a sheltered spot away from the blustery gusts of wind which caused havoc in more exposed areas of the show. The next port of call is the Oldenburg Ceramic Festival, Germany, beginning of August.
http://www.werkschule.de/en_Keramiktage/index.php. 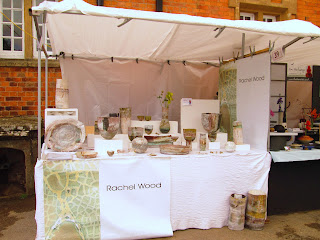 Besides that, I think things have pretty much settled back to 'normal', whatever that is......

I take that back. No, they haven't. I'm fibbing.

I don't want things to be normal anymore.